Get your #vampire fix with #PNR A Little Mysterious #teaser 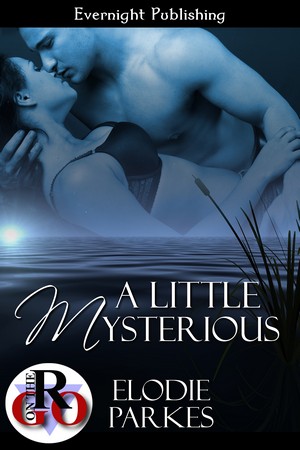 He’d been sent off course…he thought he was lost…until he found Daisy.

His vampire abilities were special. He belonged to an elite group. Moving home, they are set off course by a storm that lands Dhruv alone, hungry, and desperate in a strange town.
A story of lust, love, and coincidence.

Read the teaser:
The sun was warm on her shoulders as she walked to work. Daisy looked forward to the night, as she’d never done before. She went into the cool interior of the bar and sighed in relief.
“Wow, you look very special,” Ivor said. Grinning, he continued, “This has to be for the pale stranger.”
Daisy smiled. “I like him very much, Ivor.”
The older man gave her a kindly look. “I hope it works out.”
Daisy put her belongings in the small locker assigned to her. Her bag held the concealer and a lip-gloss, as well as her wallet. She put her cell phone by the side of her bag and locked the door. Without a pocket now, which she would have if she were wearing her usual Capri pants, she slid the key down inside her bra.
The bar was busy at lunchtime, and Daisy found the afternoon flew by.
She began to watch the time as it ticked past five, six, then seven, and finally eight at night. Outside darkness enveloped the street. Lights on in the late-night stores and eateries threw pools of glowing yellow, white, and pink on the sidewalk. She stood by the window after serving steak sandwiches to a customer at a table nearby, and looked down the high street.
It was nine-thirty when Dhruv finally walked in. Daisy was already shaking from worrying he wasn’t going to show. Her heartbeat sped up. She watched him as he walked towards the bar counter. It was as if the groups of people magically stood back to provide him with a clear path. When he was in front of her, she smiled.
Copyright Elodie Parkes Evernight Publishing

http://www.amazon.com/Little-Mysterious-Romance-Go-ebook/dp/B00GXAMHZC
http://a-fwd.com/asin-com=B00GXAMHZC
https://www.allromanceebooks.com/product-alittlemysterious-1360652-140.html
http://www.evernightpublishing.com/a-little-mysterious-by-elodie-parkes/
http://www.bookstrand.com/a-little-mysterious-mf
http://www.barnesandnoble.com/w/a-little-mysterious-elodie-parkes/1117564301
Get your vampire fix
5 stars on Readers' favorite
"  A Little Mysterious is a steamy love story guaranteed to burn up the sheets and the story of how Dhruv came to find Daisy was fantastic. Although this is a short story, Parks packs it with all the right details to make us not only care about the characters, but about how their story turns out."