Hello, and thanks so much for having me on today! Shifter Woods: Howl is the first entry in my new paranormal shifter romance series Esposito County Shifters. Howl, which is the story of coyote shifter Laurie Rivera and her (very) unexpected mate Sheriff Caleb Lynch, was originally supposed to be submitted to an anthology. Real Life™ promptly intervened, as it does, and I blew the deadline. I decided to go ahead and expand the story past the antho guidelines and Howl surprised me by turning into a 23,000 word novella. Go figure. The second entry, Shifter Woods: Roar, which runs concurrently with Howl and follows the story of Laurie’s cameraman Gavin and bear shifter Mike Ivanov, will be out in mid-May.

Also, may I just say that I am SO glad I was finally able to use this particular male model on a cover? I’ve been faunching after him since Empress of Storms, and I finally got the right book for him – yay! 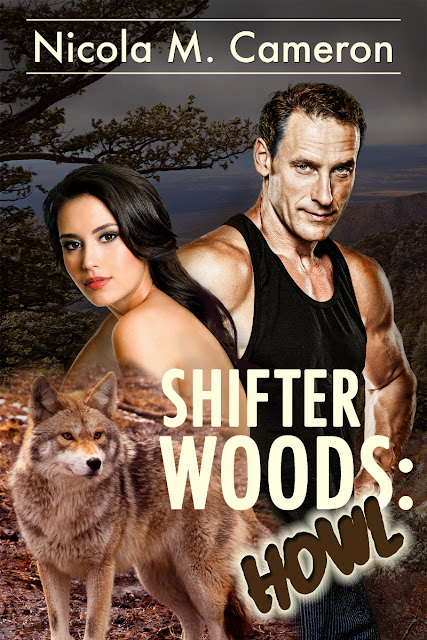 Laurie wants a news story. Caleb just wants to be left alone. But when the coyote shifters’ paths cross in New Mexico’s Sandia Mountains, Fate steps in and gives them something they never expected—each other.
Reporter Laurie Rivera is on the trail of a white slavery ring when she’s forced to run for her life in the foothills near Sandia Crest. Widowed sheriff and Alpha coyote shifter Caleb Lynch comes across the exhausted reporter and discovers to his shock that Laurie’s also a coyote shifter—and his new heart’s mate.
But Caleb never expected to have another chance at love, and Laurie has a good reason to fear being claimed, especially by an Alpha. As a snowstorm traps them in the sheriff’s cabin, Caleb must find a way around the barriers surrounding Laurie’s heart, and Laurie has to confront her past—and the humans who want her dead—if she wants a chance at her very own “happily ever after.”

Caleb Lynch slammed the cabin door closed with his foot, depositing the woman in his arms on the couch. Her eyes were still closed, her full lips turning a faint shade of blue, and her heartbeat was worryingly slow. That and the fact that she wasn’t shivering meant she was well into hypothermia.

At least he knew how to handle that. He stepped to the hallway closet and grabbed a bundle of blankets and the heavy old quilt his grandmother had made. Dumping them next to the sofa, he started stripping the cold, wet clothes off his guest.

Peeling off the waterlogged cloth revealed sleek limbs, smooth tan skin and some mouthwatering curves that made his palms tingle with the urge to touch. Worse, each new inch of exposed skin let more of her heavenly scent come to his nose. He’d thought he’d made a mistake out near the creek, that it had been some sort of olfactory hallucination, but this close it was impossible to miss. He struggled not to throw his head back and howl.

No. You have a responsibility, dammit. Get her warm and dry first.

When she was down to her underwear he opened one of the blankets and covered her with it, then reached under to strip off the damp scraps of nylon and cotton. She moaned in complaint and he bit his lip, trying to come into contact with as little skin as possible. What he did touch, however, was silken.

He pulled the bra and panties free, tossing them on top of the rest of her clothing, then set to piling more blankets on her, topped with the heavy quilt. She’d get warmer faster if you slid in there with her, part of his brain suggested. Just strip down, crawl in, take her in your arms and—

He cut that thought off. He had never laid a finger on an unwilling female in his life, and he damn well wasn’t about to start now. Even if she did look like sun and sin in one gorgeous package and smelled like—

Damn it all. It was getting harder to tear his mind away from that thought. Gritting his teeth, he sat back on his haunches and considered. Wet clothes removed and dry blankets applied, check. Next was warmth.

Along with the blankets he’d grabbed a bunch of chemical hand warmer packets. He cracked a few, shook them up to get the exothermic reaction going, then tucked them under the blanket by her feet. She shifted, toes automatically stretching towards the heat.

“You tell me, honey.” Caleb swallowed a smile, wanting to stroke the tangled black silk away from her face. “I found you in Bollan Creek. I’m guessing you fell in?”

“Creek?” One slender hand emerged from the blankets, pushing her hair back. “Yeah. Fell down a hill—” She blinked, her gaze sharpening as she took in the blankets covering her. Her other hand groped under the blankets, confirming her sartorial status. “Where are my clothes?”

He expected confusion, even anger, but the strength of the fear pouring off her made him feel both guilty and a little annoyed. “They’re right here,” he said, nodded at the pile of wet cloth. “I’m sorry, but you were going into hypothermia. They had to come off.”

She clutched the blanket closer as she peered over the edge of the sofa at her clothes. A flush spread across her cheekbones, and the fear scent kicked up a notch. “Who took them off?”

He sighed. “I did. And to answer your next question, I covered you with a blanket first,” he tapped a drape of the quilt, “and I didn’t take any liberties.”

Not that he hadn’t wanted to. “Now, I’d appreciate some answers to my questions,” he said, allowing a hint of sternness to show through. “What are you doing in Big Rock territory without my permission?”

She stared at him, biting her lower lip. “I didn’t mean to, Alpha, I swear. I’m here on business.”

“What kind of business?”

“I’m a reporter with the Albuquerque Sun—”

The growing lust generated by her scent evaporated. “You’re a reporter?”

Just what he needed, one of those snoopy bastards poking around Esposito County. Except she’s a shifter, too. What the hell is she doing in a city, anyway?

About the author
Nicola Cameron is a married woman of a certain age who really likes writing about science fiction, fantasy, and sex. When not writing about those things, she likes to make Stuff™. And she may be rather fond of absinthe.
While possessing a healthy interest in sex since puberty, it wasn’t until 2012 that she decided to write about it. The skills picked up during her SF writing career transferred quite nicely to speculative romance. Her To Be Written work queue currently stands at around nineteen books, and her mojito-sodden Muse swans in from Bali every so often to add to the list, cackling to herself all the while.
Nicola plans to continue writing until she drops dead over her keyboard or makes enough money to buy a private island and hire Rory McCann as her personal trainer/masseur, whichever comes first.